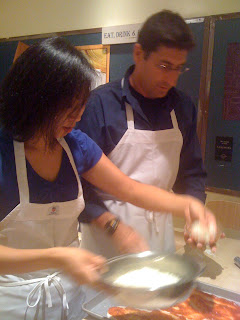 OK, first off my sincere apologies for posting this blog SO embarrassingly late, but I’m just now getting my personal blog, FunnyYellowMom, in order after a whirlwind of traveling and whatnot earlier in the year. Telling you of my true love for Fresh and Easy is something I couldn’t just let fall by the wayside, even if it is five months too late, so… here goes…

Waaaaay back in July 2009 (yes, 5 months ago… time flys when you have a toddler), I was lucky enough to attend a Fresh and Easy cooking demo with their Head Chef, Mike Ainslie at Sur La Table in the Los Angeles Farmer’s Market. I can not begin to tell you how much fun I had at this event, but let me begin anyway…
First off, if you’re not in CA, NV or AZ, then you probably have never heard of Fresh and Easy… I think it’s best described as Trader Joe’s meets Whole Foods but simpler and more affordable. The employees are friendly and helpful, the stores are basic and food is natural with lots of organic, they have yummy free samples every day, recycle bins on the way out the door, two sizes of shopping carts… I could go on and on. SIMPLE and AFFORDABLE! LOVE IT!
Back to our cooking demo night: upon arrival there were appetizers and drinks and then we broke up into four groups and prepared four simple and affordable dishes with ingredients entirely from Fresh and Easy. My group made mini pizzas and I think mine were quite spectacular! They look like amoebas, don’t they?! 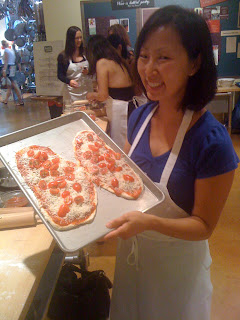 The other dishes were baked honey dijon chicken fingers, salmon with soba noodles and beef fajitas. All of the dishes were prepared and cooked and then, the best part, we all got to eat together. Everything was delicious and at the risk of sounding like a complete cheeseball, I was really impressed by the affordability of the complete meals. One of the things I loved about this event is that we each received printed copies of all of the recipes with itemized prices of all of the ingredients.
Since this event, I’ve made the beef fajitas, pizzas and chicken fingers several times. I even had my friend, Marsha (aka Sweatpantsmom) and her family of four, over for Fresh and Easy pizzas last night! I’m not kidding, I’m really in love with this store.
And I’m lucky that I have a Fresh and Easy about 3 miles from my front door and since discovering it, I haven’t set foot in a Trader Joe’s. Their parking lots make me want to shoot myself in the eyeball. So good on ya, Fresh and Easy. Once again, I’m sorry this is so late, but I’ll keep throwing pizza parties in your honor! 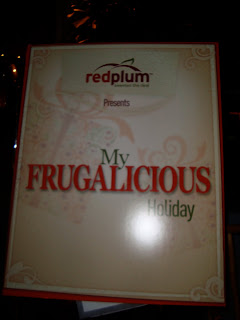 On November 18, I attended an event put on by Red Plum, called My Frugalicious Holiday at the not very “frugalicious” but super swank, SLS Beverly Hills Hotel. You’re more than likely thinking, “Red WHO?!” And honestly, that’s what I was wondering too when I got the invite. I was pleasantly surprised to find out more about Red Plum in a super fun setting, we had some delicious nosh and I even won a prize!!

Red Plum is a site you should all check out. Considering the tough economic times, it is nice to be able to tell you about a company that is helping you save a buck rather than JUST wanting to earn yours. RedPlum.com has coupons and deals for grocery, restaurants, online discount codes, life@home and style. Many of the coupons can be printed right from your own printer and there are actually practical ones that normal people use. I find that “coupon” and “bargain” sites often have a lot of ridiculous crap that most people aren’t interested in, like open a Fill-In-The-Blank Visa card today AND then purchase sixteen 100 oz bags of Johnny Cat Litter AND sign up for an online degree program to become a medical transcriptionist and then you will receive a $5 coupon to Babies R Us… even though your child is no longer a baby because it took so long for you to complete the required transactions. Oh and we’ll continue to charge your credit card $9.95/month for the Johnny Cat Litter unless you read this tiny little print and call the customer service number that will route you to a lady named “Tina” in India, to cancel your Johnny Cat Litter Club membership. And Tina will NOT let you cancel until she’s told you about all the reasons you need the litter and magically, at some point during this lengthy scripted, digitally altered spiel – you will get disconnected and have to start all over again. And you don’t even have a cat.
NOT at Red Plum though! I just found some really simple and decent deals to help save some bucks in everyday life.
At the My Frugalicious Holiday event we were treated to an amazing spread of Spanish tapas style appetizers and a full bar. I especially liked the “salted wrinkly potatoes”. No joke! They were awesome and I got the guys from the kitchen to tell me how to make them. 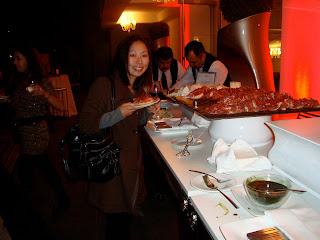 We also received some really cool, affordable gift ideas under $30 and a goodie bag full of some of the items. I think my favorite item was the “How Many Days Ago” which is a little kitchen gadget that will count off how many days food has been open in the fridge! You can get a suction cup, magnet or elastic band attachment and stick it onto a food item when you open it. No more guessing how long the left overs have been marinating in the back corner! This is a great stocking stuffer idea as they are only $8 for a pack of two!

Ikea helped sponsor the event and I was lucky enough to win a raffle prize of some Ikea candle holders! It was a really fun night with some great gift ideas for everyone! Thanks Red Plum! 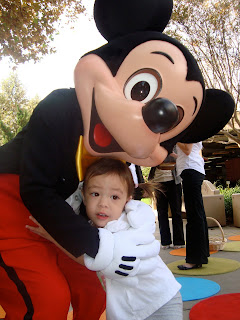 Ignore the look of fear! She was REALLY excited!

Last month my daughter – 2 year old Aubrey – and I had the privilege of being invited to a really fun Disney event: Mickey’s Virtual Train Tour. This special event was the final stop in Mickey’s virtual train tour from Kansas City to Los Angeles. It was held at the Griffith Park Travel Town Museum and I have to say, anything I have ever attended that was put on by Disney has been such a blast!

THE Mouse, himself, was there to greet the toddlers and their parents. We were treated to a private screening of the new primetime special Mickey Mouse Clubhouse: Choo Choo Express which aired on the Disney Channel on Oct 25 and will be released on DVD on Amazon on December 1, 2009. The kids got also got to play with the new Fisher Price Mickey’s Magic Choo Choo train toy. I was pleasantly surprised that this train toy was a big hit with my daughter as she has never expressed much interest in playing with trains. She’d rather ride them… and we got to do that too! 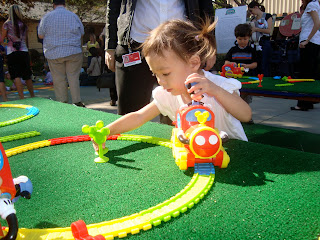 The Travel Town Museum has a really cool kiddie sized train that loops around the museum and it’s big enough for adults to ride along. It’s a nice long ride and my daughter loved every minute. Little ones were also treated to a a Hot Dog Dance lesson, coloring pages station, photos and hugs with Mickey Mouse, balloons and hunky Marines handing out take home surprises (a kiddie train conductor’s hat, a book, some temporary tatoos)! This was mommy’s favorite part. 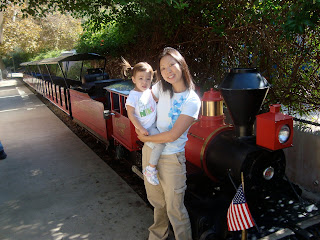 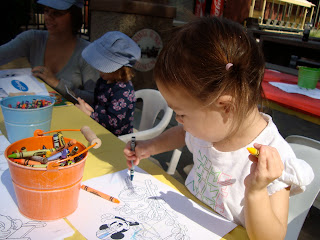 I’ll be honest here – I wasn’t sure if my daughter even knew who Mickey Mouse was. We mostly watch Nick Jr in our house and she had only been to Disneyland once when she was 18 months old. But when I told her we were going to meet Mickey Mouse she got VERY excited. Something about the sound of his name, I guess. For about a year, she use to confuse him with Chuck E Cheese (sorry Disney) but after this event, there is no mistaking the #1 mouse in her life. She was totally smitten and we had a great time. Thank you Disney for some fantastic, happy memories from a special day together!
Here is a little video of Aubrey, waiting patiently, for her turn with a personal hang with Mickey Mouse. They played a little pat-a-cake: