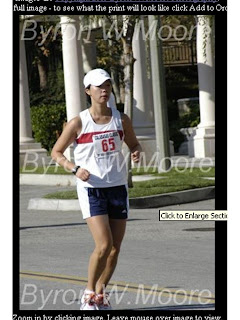 I’ve made an exciting and insane decision to run the 2010 L.A. Marathon. It’s in March and I just started training two weeks ago. I’m in decent shape, but not what I was a few years ago, PRE baby. HA! Shocking, I know. But I will openly admit, here on my personal blog, that I have been slacking off on exercise and eating more junk food than I used to. I did fail math many years ago (sorry Asian people) but here’s a simple equation for all of you:

Little Exercise + More Junk Food = TIGHT PANTS
I’d LOVE to use motherhood as an excuse and let’s get real ladies, many women do. Having a baby is the most ridiculous thing that a woman can do to her body. It’s really funky and you have so little control over what happens to you during that time. The aftermath is no picnic and most women have to work hard to get back to some semblance of pre-pregnancy body. Don’t beat yourself up and give yourself time.
But my child is almost 2-1/2. I have no plans of having another one and it’s time for me to get serious and disciplined about getting back in good shape. I’m not just talking about being thin, but healthy. Anyone who knew me about 4-5 years ago remembers that I had a six pack and had about 18% body fat or something swell like that. I was keeping a healthy low fat/low sugar diet and working out, both cardio and strength training 6 days a week. Can I do this now, traveling for a living and with a toddler at home, not in pre school yet? HELL NO! But I can at least set realistic goals for myself and keep them… so why not go for a marathon? Heck, Paula Radcliffe WON the NYC Marathon for the 3rd time in a row in 2008 as a 35 year old mother (she’s almost as old as me) and in 2007 when she won the 2nd time, her baby (her first child) was only 10 months old. I have NO excuses. Sigh…
Running a marathon has been on my to-do list since about 2000. That was the year I did the AIDS Ride from St Paul to Chicago. Approximately 550 miles on a bike in 5 days, 4 nights of camping. News flash, this will never happen again, but I’m ready for a different, less time consuming kind of torture.
Oh and I also decided, on a last minute whim, to sign up for the San Dimas Muddy Buddy race this weekend. Wish me luck. I haven’t been on a bike since some time in 2006. I did some practice riding on the actual course to get ready, but mama will be walking some of the hills. The suckers are big and rocky!
Time to get ready for my big Fed Ex commercial audition and after that… I’ll be running.