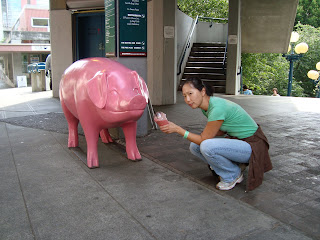 In the last couple of weeks I:
– did shows in Meridian, ID
– did a show in San Jose, CA
– had stressful disagreement with commercial agent
– fired commercial agent
– hired new commercial agent
– fired a nanny
– sort of hired a new one
– new nanny was arrested by CHP and I had to sort of un-hire her and kick her out of my house
– boyfriend’s car was stolen in Malibu
– boyfriend’s car was recovered 2 days later – thousand’s of $s of valuables gone including Garmin Zumo 550 GPS, SCUBA gear, wallet, driver’s license, credit cards, cash, prescription glasses, jacket, sunglasses…
– still need to figure out nanny situation and get my commercial agent to send me the money she owes me
I’m leaving for Washington (WSU in Pullman and The Comedy Underground in Seattle) tomorrow and it will be nice to escape and pretend my life isn’t total chaos at home. At least my two year old is peeing in the potty! There’s some good news!
SO… who’s coming to my shows in Washington?!