About a month ago, I introduced Aubrey to Michael Jackson and now, she can’t til she get enough. Literally, as soon as we get in the car she needs to hear an MJ song or she gets a little surly.


Bad is one of her favorites and here she is dancing and singing along to the video on YouTube. I hope you’re having a great holiday weekend!

Happy Memorial Day Weekend! You made it to the long four day weekend that marks the beginning of summer! WOOHOO!


Today, Lee (my cutie pie) and I were waiting in the long line for discount gas at Costco, when we noticed the man in the line next to us shaving with an electric razor in his car. Really? Did he plan this activity? Does he keep his electric razor in his car just for these moments? Does he let the stubble fall all over his lap like a big, disgusting slob? Doesn’t he have a smart phone with Words With Friends or Bejeweled or something? Geez dude. I’m almost always in a hurry, but come on. It’s a holiday weekend. (And no, we’re not going to talk about the time I tried to take my bra off and out from under my shirt while driving on the 101 south going to Pasadena because it was too tight. Hey, I was pregnant and expanding!) Relaxxxxxx…


I hope you all have a safe and fun holiday weekend and don’t forget to honor and thank the many veterans who have served our great country! 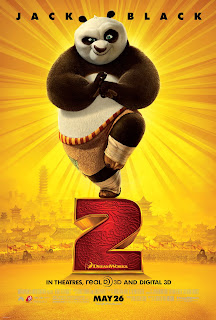 Last week Aubrey and I wend to the Dreamworks campus in Glendale to attend a special preview screening of the animated sequel Kung Fu Panda 2 . This screening also included a sneak play preview of the Mattel KFP2 toys and a lunch where fried macaroni and cheese balls and mini bundt cakes were served, so we were pretty happy campers.
Although Aubrey was a little disappointed that there weren’t any slushies and popcorn at this screening (we saw the film in an actual Dreamworks screening room) she was very excited to see Kung Fu Panda 2. She has been a long time fan of the original Kung Fu Panda movie – even though I somehow have managed to never see it – and she was pumped and ready to go for this special event.
In this 2nd installment, Po (Jack Black) joins forces with a new group of animated animal kung fu masters to take on the evil peacock Lord Shen (Gary Oldman) and his deadly new firecracker cannon.
So I’d like to start off with the positives:
– Kung Fu Panda 2 is visually stunning and we didn’t even get to see it in 3D. Ya done good Dreamworks and I’m sure it will be even MORE stunning in 3D. For anyone who is an animation geek, this one is a must see. It was even breathtaking at times.
– The story was interesting and held most of the kid’ AND adults’ attention spans for a long time. Like I said, I had never even seen the first one, but I was able to jump right on the Panda wagon and get into it.

– The Mattel toys also seemed to be a hit and we were lucky enough to take a couple of them home with us in a gift bag. Aubrey received the figurines above and ended up playing with them for well over an hour later that night. However, I did hear her yelling her own made up line of, “DON’T YOU EVER KILL MEEEEEE!!” while pulverizing the bad wolf guy with the Panda. Which leads me to the “You Judge For Yourself” portion of my review…


Here are my not so positive opinions and then we’ll wrap this up in a nice little bow at the end:


– The second half of film was fairly dark and violent and from what I heard from some of the parents who had seen the first one, it was darker than the first one. But I’ve seen this pattern in many kids’ movies, including the uber popular Toy Story franchise. Toy Story 3 kind of made me feel like I was watching the family version of Saw at one point. Anyway, I digress. My daughter is almost 4 years old and generally doesn’t have too much trouble sitting through an animated feature. The last section of KFP2 is quite violent, however, and while it is action packed, it did seem to me to just go on and on and on. Just when I thought, “OK, NOW the big fight scene is over,” it would gear back up again.


I guess my heads up number one for parents of little ones is that this IS a rated PG movie. If your younger child has a tough time with darkness and bad guys for a prolonged period of time, maybe not for you. And maybe my kid was a little more sensitive to it because (sorry) she’s a girl and she’s never pretended to shoot anything in her life. I dunno.


– Here’s heads up number two and this is something that I would have liked to talk about in a Q&A perhaps, but we weren’t given the opportunity, nor would our kids have sat through it… but (MINI SPOILER ALERT!!!) in the movie, we find out that Po’s panda parents abandoned him to save his life when their village was pillaged by Lord Shen and his bad guys. There is a heart wrenching scene where the mama bear is shown hiding Baby Po and then running for her life. And I’ll let you guess as to whether she makes it or not (the mom ALWAYS gets the axe or the lock up in animation – Bambi, Nemo, Dumbo…). While they don’t show the attack on her, it is implied and the scene actually made my daughter cry and get pretty upset. Oh and I was sobbing too and so was every other mother in the house. It’s sad! But I was surprised at how emotional it made my daughter. She’s older now and she’s starting to “get it” which is cool and scary all at once. All afternoon I had to answer the questions, “Why did the mommy bear leave her baby,” “Why was the baby panda crying?” and “What happened to his mommy?” Ugh. Wahhh!


The other part of this portion of the story line (MORE SPOLIER) is that we learn that the noodle house owning goose, Mr Ping (James Hong – YAY James Hong!) adopts baby Po and raises him as his own. As a Korean born adoptee raised by geese… I mean caucasian people… this actually got me emotional on different levels and with so many Americans parenting transnational and transracial children these days, I hope they, the parents, are prepared for the barrage of emotions and questions that will come after the movie. I explained to my daughter that I was adopted by my mommy and daddy just like Po was and then she wanted to know why my mommy couldn’t keep me (I don’t know). Did she abandon me (yes). Was I going to ever leave her – NO! So, even though we had a great time, it turned into a bigger day of emotions and issues that I was expecting. Anyone immediately touched by adoption (birth parent, adoptive parent or adoptee) is going to have some feelings about this movie. I’m just warning my people!


– And my final and most serious issue with the film is the whitewashing of the cast. This is an American made film set in China. Yes, it’s a cartoon, but it is clearly set in China (not a Chinatown in the USA) and it draws it’s story, character names, movement and imagery from the rich and real history of China and Chinese kung fu. So why weren’t more of the actors of CHINESE descent? Or at least Asian American? I, as an Asian American actress, get a little upset about this kind of stuff and I don’t think I’m being too ridiculous. While I never felt the film was mocking Asian or Chinese culture in a way that was racist or inappropriate, throughout the entire film I kept hearing recognizable voices of non-Asian actors and the handful of actors who were of Chinese descent were in lesser billed roles. The director of KFP2 is Jennifer Yuh and so… that’s cool. But the stars of the film are all white. I get it that picture deals are made and contracts are signed and Dreamworks has to do it’s job to sell this movie, but there’s no reason Lucy Liu shouldn’t have had Angelina Jolie’s top billed role and no reason James Hong or Jackie Chan shouldn’t have had Gary Oldman’s leading role of Lord Shen. Although, James Hong steals the show in his role as Mr Ping. He is a true pioneer and a sweetheart to boot.


But I digress… Of the 13 top billed names on the cast, only four are of Asian descent . So shame on someone. And I’m going to go ahead and say it: It’s because the roles are Asian. There’s even a black guy in the main 13 characters of this movie. I’ve already discussed this issue with some friends and some people have thrown the “But it’s just an animation and you don’t see the actors who are playing animals so why does it matter” argument at me. But it does matter. Asians are now and have been the most underrepresented minority on tv and film for eons and it’s because we are simply not given the due respect that other human beings are given in this industry. We are not seen as Americans and we are not respected as people with spines. Therefore, it is socially acceptable to cast The Last Airbender (yikes) and Akira and Kung Fu Panda with white and even black actors. If you think I’m being a tad overly sensitive, ask yourself this question: In an animated film where a character was a white person or a black person would they hire an Asian actor to play that voice? Kind of doubt it, but the reverse is always fine when it’s a role of color, even when it’s not animated! We’ll get there eventually, but it’s a slooooow row to hoe. Yes, I just said ho and set myself up for some horrible Asian actress jokes. Go ahead. Make them. Every Asian actress has played one or been asked to play one and we all own our own lab coats for auditions. (My big prostitute role was when I was 9 months pregnant too! It was a dark, dark comedy.)

But, once again, I digress. After all of that bitching and moaning, I still think you should go see the movie. I did enjoy it and my daughter did enjoy it. I think the film is more appropriate for kids who are a little older – perhaps 6 and up (remember, intense!), but overall it was a fun moviegoing experience and Aubrey can’t stop talking about it. It also introduced her to more Chinese culture has piqued her interest in martial arts. Maybe I have the next Michelle Yeoh on my hands. BTW, she played the Soothsayer and was awesome! Did I mention we got fried macaroni and cheese balls?

If you would like to learn more about Kung Fu Panda 2, please visit these official sites: