Last weekend, I attended my 20th high school reunion in Excelsior, MN. I graduated from Minnetonka High School in 1990 and let’s just get the unpleasantries out of the way right now. No, I did not enjoy my high school experience very much. In fact, I was dying to get out of this school and lived for my escape to college on the East coast.


This is not to say that I didn’t have some wonderful friends – some of whom I’m still good friends with today – and even received a top notch education there. Academically, it was an excellent public school and even though I didn’t crack a book or earn an A while I was there, I did actually learn something. For instance, see what a fabulous writer I am now? (Just don’t ask me what X equals. I still don’t know.)


Minnetonka was a “good” school because it was in an upper class suburb. What I have learned time and time again since then is that “good” schools are often full of “bad” kids. There was an amazing sense of entitlement amongst the kids at Minnetonka High School and I don’t imagine it’s too different today. The disparities between the categories of kids (jocks, nerds, cheerleaders, headbangers, geeks, etc) were abysmal. I know these “classes” of popularity exist at any school, but they were extra special lame as shit at my school.


One very popular girl who sat right next to me in a class day after day, never once said a word to me until she saw me driving a red convertible home one afternoon. The next day, she said, “I saw you leaving the parking lot yesterday. You have a really nice car.” I said, “Oh it’s my mom’s.” She said, “Oh.” And she never spoke to me again. We were sixteen. You see, if you didn’t drive a car to school after you turned 16… LOSER. We had a two page, color spread in our senior yearbook dedicated to students’ cars. No, really. It was a snotty school with its fair share of mean kids.


I was one of those mid-level floaters. I had friends all over the place – jocks, brains, music nerds, art geeks, cheerleaders – but my closest friends were the brains. The over achievers. Why? I still don’t know to this day. The only thing I can come up with is that maybe I thought hanging around the kids who cared a lot about their grades would somehow make up for my lack of effort. I was that kid who never studied, never listened or took notes and then would get a decent enough grade on the tests to pass the class. I turned in about 3/4 of my assignments. I never did extra credit. I just. Didn’t. Care.


I never went to a school dance. I didn’t go on a date until college. I only did three extracurricular activities my entire four years there (Madrigals, women’s quartet and cross country skiing. I was horrible at the latter but it was the genesis of a lifelong love/hate relationship with running as there was no snow the year I joined.)


I was one of a very small group of ethnic minorities in our school. There were some ESL students who weren’t mainstreamed in our classes and there were a few other Asian kids, a few Jewish kids, there was one girl who was half black and… well that was it out of 450 in our class. I felt like an outsider and dreaded going there every day. I didn’t have a super happy family life at the time and if it hadn’t been for my closest friends, I don’t think I would have made it through.

One would think that a student of this ilk would be somewhat bitter about their high school years but it’s soooo far in the past now. Like, um, 20 years. WHAAA?!! Enough water has gone under the bridge and at our reunion, I was pleased to find that the people from Minnetonka’s class of 1990 have grown up into lovely adults. At least the ones who came to the reunion. I’m guesstimating (don’t you hate that word?) far less than half of our class showed.

The most interesting part of the reunion was hearing what people were doing with their lives. There were some surprises, but most were typical. And I mean that in a good way. I guess what I’m getting at is the people who you thought were so much prettier than you, smarter than you, more popular than you, or whatever – well, 20 years later they’re mostly all collecting a paycheck, raising kids, putting on bigger clothes, combing fewer hairs on their heads – and in this case, seemed a little more down to earth than maybe they were as a teenager. I can only hope they are raising their kids to be a little kinder and gentler as well.


I’m glad I went. I can’t say the prime rib buffet, cash bar and Target bakery cupcakes with blue frosting ‘M’s were worth the $50, but seeing some people from my past as actual people for the first time was. And I stole two dozen cupcakes on my way out the door. So it’s all good. 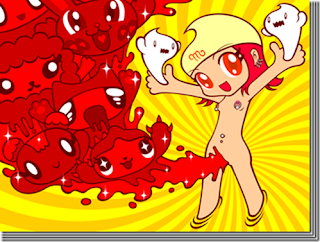 OK, if you have a weak stomach and can’t deal with reality, I would suggest you go back to watching Dancing With the Stars or The Food Network or something, because I’m about to tell it like it is…

I will be turning 38 in less than two months. I gave birth to one child, just over three years ago, I’ve always had a fairly easy time being a woman in the reproductive organ department. Some women have a really hard time – horrible periods, migraines, constipation, IBS, hormonal fluctuations, yeast infections, infertility, fibroids… the list goes on and on. It ain’t always easy owning a vagina and I, for one, have been very fortunate to have a fairly text book health record.
However, I was recently talking to a friend who is the same age as me, and we were commiserating about how weird our periods have been in our late 30s and she said, “We are so peri menopausal.” WHAT?! Really? Is it that time already? As if the fact that my 20th high school reunion is this weekend wasn’t bad enough. Now I have to think about being peri menopausal. Great.
At this point, I’d gladly give away my uterus. Too bad there’s not a market for that organ, I’d have it on Amazon right now. I’m done using it and it’s causing me nothing but pain and inconvenience for the first time since junior high. My cramps are the worst they’ve been in years, my period lasts for about a thousand days and I bleed like I’ve been stabbed in the vagina with a bowie knife. Multiple times. You know how off-putting it is to be in Wal Mart trying to find the BIGGEST tampons in the world? It’s almost as equally as off-putting as having to pay for a warehouse flat of said gigantic tampons each month.
So I decided to Google “symptoms of peri menopause” and apparently, it’s just the same damn symptoms I’ve been having since I first got my period a thousand years ago. Here are some of the old faves:
– Headaches
– PMS
– Lumpy or tender breasts
– Water retention, bloating
– Mood swings
– Anger
– Difficulty concentrating
– Depression, irritability
– Stress and extreme fatigue
Really? Well if this is the case, I’ve been peri menopausal for quite some time I guess.
Women have always been treated like wilting hysterics and it’s time, for me at least, to just embrace the face that moving towards the middle of life (ACK!) will bring some changes. I needn’t be so shocked or bothered by it all. Let’s just face it: Being emotional and somewhat off center – both physically and emotionally – at any given time, is just a NORMAL part of being female. And this is part of what makes life exciting. Period. Pun completely intended.
If this blog inspired you to share something about your Aunt Flo, please comment below and have a wonderful day!

OK – This deal is for the Canyon Country location of Menchies ONLY, but there’s still something in it for you if you read on…

Screamin Coupons offers deep discounts on entertainment, restaurants, health and fitness, amusement parks, spas/salons and MORE all over Southern California and Utah. It’s free to register and if you use my exclusive link here, you will receive a $5 credit in your account.
The way it works is…
1) You register to receive the daily deal announcements.
2) Start receiving the deal announcements for your area only (you get to choose!), via email.
3) See an offer you can’t live without.
4) Buy the “coupon” that day & you usually have 3-5 months to redeem the coupon. That’s it!!
But wait, there’s MORE! The thing I love most about Screamin Coupons is they give 5-10% of their profits BACK to local schools and non-profits and YOU get to choose which school/organization you want your sales to go to! Save money and give back to your community? It’s a no-brainer. Also, they have a teriffic referral program which can earn you $10 in Screamin Coupons bucks! So what are you waiting for?
Remember, use this link to get a $5 credit:

AND here’s a cool deal for lovers of frozen yogurt in Canyon Country/Santa Clarita Valley. Buy this $5 coupon and get $10 worth of Menchies Frozen Yogurt at the Canyon Country location only.
http://www.screamincoupons.com/i/QC9GT20FVN/menchies-frozen-yogurt-5-for-10
The coupon is good until October 14, but you have to buy it TODAY!!
AND if you use my registration link, you’ll get a $5 credit in your account which equals… $10 worth of Menchies yogurt for FREE! Of course you can use the $5 credit for anything you want on Screamin Coupons, but this is a pretty killer deal for those of you in Canyon Country! I’m jealous as Menchies is one of my favorite places on earth!
So dig in and enjoy! Check back here for daily Screamin Coupon deals – I have a widget banner on the left to connect you directly to some of the best local SoCal deals so click away!
Happy summer and thanks for stopping by. 😉