My GIANT apologies to my friends at PBS as I am writing this post WAY too late. I misunderstood the airing schedule and thought these amazing documentaries weren’t being broadcast until November and it turns out they aired on PBS in August and September but can be seen online through the end of November. Oops. My bad. I’m horrible with dates.


Nevertheless, I wanted to put out a quick blurb to the blogosphere and let you all know that these are three documentaries about adoption that are worth watching. They are thought provoking and important. Most of you know that I was adopted from South Korea as an infant and have very strong opinions and views on international adoption, open adoption, single motherhood, trans-racial adoption and the many issues surrounding adoption, in general. Adoption is becoming a more and more “accepted” family building block in our American culture, but we often forget to ask the important and, sometimes, difficult questions: Who does adoption affect? How are individual lives changed? What is ethical when dealing with a transaction involving the transplantation of a human being?


I was honored to receive screening copies of each film and can honesty say that all three were moving, fascinating, informative, enlightening and more. I’m was also fortunate enough to have met the filmmakers and their film subjects during their press stop here in Los Angeles. They are proud of their films and I’m am really happy to be able to help get the word about their work.


Please take the time to go online to view and support these important documentaries. They will be available on the PBS website through November 30, 2010.


In The Matter Of Cha-Jung Hee 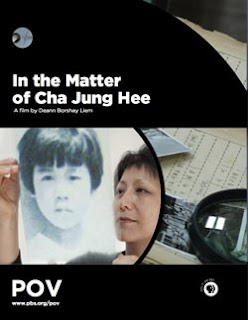 Filmmaker: Deann Borshay Liem
Synopsis (per PBS): Her passport said she was Cha Jung Hee. She knew she was not. So began a 40-year deception for a Korean adoptee who came to the United States in 1966. Told to keep her true identity secret from her new American family, the 8-year-old girl quickly forgot she had ever been anyone else. But why had her identity been switched? And who was the real Cha Jung Hee? In the Matter of Cha Jung Hee is the search to find the answers, as acclaimed filmmaker Deann Borshay Liem (First Person Plural, POV 2000) returns to her native Korea to find her “double,” the mysterious girl whose place she took in America 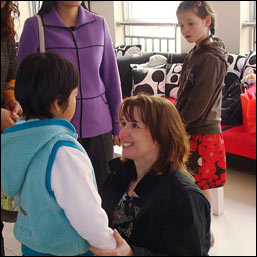 Filmmaker: Stephanie Wang-Breal
Synopsis:
What is it like to be torn from your Chinese foster family, put on a plane with strangers and wake up in a new country, family and culture? Stephanie Wang-Breal’s Wo Ai Ni (I Love You) Mommyis the story of Fang Sui Yong, an 8-year-old orphan, and the Sadowskys, the Long Island Jewish family that travels to China to adopt her. Sui Yong is one of 70,000 Chinese children now being raised in the United States. Through her eyes, we witness her struggle with a new identity as she transforms from a timid child into someone that no one — neither her new family nor she — could have imagined. 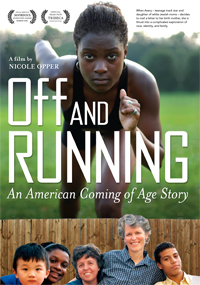 Off and Running tells the story of Brooklyn teenager Avery, a track star with a bright future. She is the adopted African-American child of white Jewish lesbians. Her older brother is black and Puerto Rican and her younger brother is Korean. Though it may not look typical, Avery’s household is like most American homes — until Avery writes to her birth mother and the response throws her into crisis. She struggles over her “true” identity, the circumstances of her adoption and her estrangement from black culture. Just when it seems as if her life is unraveling, Avery decides to pick up the pieces and make sense of her identity, with inspiring results.

Tags: Adoption • Amy Anderson • documentaries • In The Matter of Cha Jung Hee • Off And Running • PBS • POV • Wo Ai Ni (I Love You Mommy)

I’m not gonna lie… I haven’t been to Wendy’s in a while. Not because I dislike Wendy’s but mainly because my family and I don’t eat a lot of fast food. When I do, I’m on the road and other fast food chains are more common and easier to find. However, I do like Wendy’s and I think they are one of the best national fast food chains. They offer a wide variety of non-fried items and have for a long time. Long before the “healthy” craze hit the fast food industry, Wendy’s was offering baked potatoes, once had salad bars and of course, their signature chili. Also, their beef is never frozen and you can taste the difference.

This week, I was invited to try Wendy’s new Pick 2 Menu and I must say, I was really impressed and left Wendy’s happily full and satisfied. The Pick 2 Menu is a great way to portion control and save money if you eat out a lot. The Pick 2 menu is divided into two sections and you pick one item from each section to make your own combo. You can have a fulfilling lunch for only $4.99 going healthy one day, go for the grease the next time and mix it up on the days you want to.

The menus include items such as a cheeseburger, a cup of chili, a Frosty, a soda, French fries, a baked potato, Chicken Go Wraps and half servings of their premium salads and it’s actually possible to make 28 different combinations in all!

I treated myself to a cup of chili and the new Apple Pecan Chicken Salad and I LOVED IT! The chili has been consistent for years. It was a good portion but not too much and came with crackers but the salad! Oh the salad! It was really REALLY good – mixed field greens (not just iceberg lettuce), grilled chicken, diced red and green apples, cranberries, roasted pecans, blue cheese crumbles and a pomegranate vinaigrette. My friend, Marsha (aka SweatpantsMom), had the BLT Cobb Salad and it looked equally as yum.

At this point, I want to disclose that I worked with Wendy’s and TheMotherhood.com and I received a small stipend to try the Pick 2 Menu.I know there is a fair amount of debate in the bloggersphere about whether a blogger will write a fair review if they are receiving compensation. Listen, I’m not blowing sunshine up your fast food hole. I get paid whether I write something nice or not and I have no motivation to lie about the food. It really was good and I would definitely eat off the Pick 2 Menu again and tell other people about it. In fact, I’m telling you right now!

And here’s where YOU come in. Wendy’s and TheMotherhood.com gave me two $7 giftcards for a reader giveaway! $7 is enough to try the Pick 2 Menu and have an additional beverage or other treat. 🙂

Want to win one? There are three ways to enter and please leave contact information in your entries:

1) Leave a comment telling me your favorite menu item at Wendy’s!

2) Follow my blog on Google Friend Connect (the link is on the right of this post) and leave a comment to let me know you’re following.

3) Tweet this giveaway and leave the URL in a comment to show you have done it. Here is a copy and paste you can use: 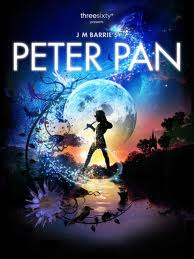 If you’ve never seen a live production of JM Barrie’s Peter Pan, on stage, this is the one to see! After successful mountings in London and San Francisco, Peter Pan 360 is here at the Orange County Performing Arts Center.


I have seen and been in a fair amount of theater in my life. I do love it and don’t get out enough to see live theater so I was really excited when I got invited to attend this current production.

Granted, I’ve never seen ANY production of Peter Pan, other than the Disney movie version, and I’ll admit I was a little skeptical about this particular production, but man was I wrong. Wrong with a capital WRONG!

The 360 in this particular production refers to the world’s first 360-degree CGI theater set. You can see a promotional video clip of the production on the website, but it does not even come close to doing it justice.


I’m not one who generally poo-poos technology but for some reason I wasn’t so sure this was going to look cool. That it would belittle the actors’ performances in some way. I didn’t want the star of the show to be a 360 screen just for flying sequences.


Well, like I said I was totally wrong. It wasn’t that at all and the play was really brilliantly acted, directed and staged. The 360 CGI screen was pretty cool and definitely added to the experience as a whole.

The venue itself – the threesixty Theatre – is something different and exciting for the Orange County Performing Arts Center. The play takes place in the round and is housed in a 100 foot tall tent that was shipped all the way from London. And on the ceiling of this white tent, 12 projectors deliver 15,000 square feet of CGI projection including pirate ships, waterfalls, dolphins, trees and 400 square .iles of virtual London.


But as exciting as all of that was, the stars of the show really were… the stars! Jonathan Hyde as Mr Darling/Captain Hook and Itxaso Moreno as Tinkerbell absolutely stole the show and Nate Fallows as Peter Pan was surprisingly, wonderfully complex.

There are also really cool puppets and an overall this is a creative, fresh and exciting interpretation and adaptation of Peter Pan.


I took my 3 year old daughter to this show and it was a little too intense for her. Mainly, because only two days earlier, I accidentally terrified her to death by taking her on the Pirates of the Caribbean ride at Disneyland. Read more about my fabulous parenting skills here.


WAY too many pirates in one week and she had to leave just before intermission. That being said, she seemed to be the only child leaving and there were several kids there the same age. It’s really just MY very sensitive, sweet kid, but there are some scenes which are a bit intense and violent and the production company suggests 5 as an appropriate age level.


Another feature of this presentation that I really enjoyed was the outdoor patio where there were snacks, drinks and candy for sale and you could even pre-order a glass of wine for intermission!


Please patronize this wonderful, non-profit arts center. It is so beautiful – stunning actually – and is one of the nation’s premier arts organizations. They offer a wide range of programs covering everything from jazz to classical, Broadway to ballet and more.