Last weekend, I visited a longtime friend and mother of two. We have been friends since 1st grade and throughout all of life’s many twists and turns, we have always kept in touch. Her oldest son is 5 months older than my one-and-only daughter and part of the reason for this recent visit was to meet her new addition, son number two. He’s almost 5 months old. We are nearing… GULP… 40.


My daughter is 3-1/2 now. Even though we all know 3yo’s are CRAZY, irrational little Nazi’s, she’s not a baby anymore. I am not a baby person and it has been a relief having her at an age where she’s finally “easier”. She’s potty trained, she can put food in her own mouth, she can play independently for quite a while and most importantly, she sleeps about 11 straight hours every night, takes a 1-3 hour nap in the afternoons and attends preschool every Mon-Fri morning. WOOT!

Wait, I take that back MOST importantly, I have my body back to myself. I’m not super vain about the appearance of my body. I work pretty hard to keep in shape but I don’t kill myself and I don’t strive for physical perfection. I leave that madness to the rest of the freaks here in L.A. I’m a comedian. But the 4th degree tear, the post-partum depression, the leaking breasts (Yes, I was like a dripping faucet. Well, two dripping faucets.) are all but a faint memory now and for some reason, I’m having a hard time deciding to let it go and move forward with life. Until… last weekend. Remember? I went to visit my friend.


Her baby was adorable. Her older son was adorable. She’s a terrific mom. The baby barely cried for just a few minutes before his nap. It was all pretty easy-peasy-Japanesey, but hanging out with an infant and a preschooler for just a couple hours was the nail in the coffin for me. It made me realize I do NOT want to have another child.


It’s not such a big deal, right? Lots of people are choosing to have only one child nowadays. It makes economic sense and for me, I think it’s my last chance of reclaiming my sanity. So is this my body’s biological clock making a last ditch effort to do it’s thing? Is my hormonal urge to reproduce really that strong? After examining these hard questions I realized the answers were NO! I was questioning my one-child decision because I felt sorry for my boyfriend and my daughter. Ai yi yi. This could turn into an entirely different blog all together now. Lutheran guilt syndrome or let’s talk about why I take better care of everyone else than myself. I even feed the dog and take her out to poop and pee while my breakfast gets cold. Every damn morning. Apparently, I care WAY too much about other peoples’ (and animals’) feelings sometimes.


Yes, I was feeling bad that maybe THEY would be missing out on something magical and no doubt, if we did have a baby, it would be awesome and we would love it and, eventually, we would be so happy, blah blah blah. But the bottom line is, I don’t want to do it. And, BTW, I don’t want to adopt either. One is enough. More than enough and I’m going to stop beating myself up about it. Time to focus a little more on myself, my career and being the best mom I can be to the kid I already have. Starting right… NOW!

The first film I saw was the much hyped and super adorable, Babies. The fine people at mPRm Public Relations extended an invite for an early screening and I jumped at the chance. I had seen the trailer a few times and couldn’t wait for my chance to see it. And this is coming from a mom who is NOT a baby person!
I’m pleased to report that the documentary is as enjoyable and smile inducing as the trailer. Unless you’re a baby hater, I don’t know how one could not enjoy this film, however I do think parents will enjoy this film the most.
Through the static lens of the camera, director Thomas Balmes shows us the lives of four new humans in four different cultures – Mongolia, Namibia, Japan and the US (San Francisco). It is a true documentary, void of narration or backstory, as the director simply lets the babies’ actions speak for themselves. There’s really not much more too it as far as the description goes, but some the moments he and his crew manage to capture on film are truly breathtaking.
If this film taught me anything as a mother, it’s to stop worrying so much about my child’s development and to avoid overstimulating her. Yes, I live in Los Angeles and my daughter is growing up in a highly competitive and faced-paced environment. It’s important for her to keep up, but it’s just as important for her to just be sometimes. To let children be children. Aside from cultural differences, babies are same all over the world and this film does a beautiful job at displaying the universal truths of human nature.

Documentary number two was In The Matter of Cha Jung Hee – the follow up film to Deann Borshay Liem’s, First Person Plural. Deann is a fellow Korean adoptee and has become a personal friend over the years, but I assure you, even if you have no connection to the Korean adoptee community, you will find her story fascinating. I saw this particular screening as a part of the Los Angeles Asian Pacific Film Festival.
The brief backstory (without any spoilers) of Deann’s life, is that she was switched for another girl during the time of her adoption from Korea to the United states in the 1960s and told by Korean social workers not to reveal her true identity. The adoption was finalized and her adoptive, American family believed they were receiving the girl they had sponsored from abroad for so many years – Cha Jung Hee. In Liem’s first documentary, she tells the story of her adoption, her upbringing in California and the discovery of her falsified identity. It is in this first film that she goes in search of her true birth family in Korea.
In Liem’s new documentary, which isn’t a true sequel, but a companion or follow-up film, Liem battles cultural red tape and social barriers of Korea on a search for the woman who’s identity she has had almost her entire life – Cha Jung Hee. Honestly, I don’t want to say much more because the story is so compelling and one that she tells best. Furthermore, she tells her story with such candor and even humor, baring her emotions throughout the process so that you may take the journey with her, I guarantee you will not be disappointed.
While I believe viewing her earlier documentary, First Person Plural, beforehand offers a richer viewing experience, it is not necessary as Deann does cover the backstory of her adoption in the 2nd film. To learn more about her films and especially to make a donation to help fund her next documentary, Memories of Forgotten War , visit her production company’s site, MuFilms.org.
Happy movie watching! Have you seen any great ones lately?! Please let me know. I’m dying to see Food Inc. 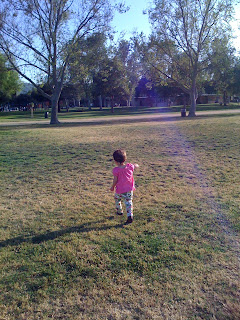 My one and only baby girl is turning two tomorrow. In some ways, these two years have flown by but for the most part, it has been a long journey to the place of big-girldom. If there’s anything I am as a mother, it is honest. Most would say too honest, but I think it’s important. I’m really glad the baby days are over and that’s the truth! Pthhhh!

The high chair is GONE! The crib is gone (well, almost gone… it’s in the garage and listed on Craigslist)! All in the same week my girl decided to jump out of her crib, stand up in her high chair and she even pee-peed in the potty three times! My little baby is a “big girl” now and I’m feeling emotions of, well, honestly? JOY! I will openly admit to not being a baby person. Women and moms especially are usually afraid to admit this because it makes you look like a “bad mother” to say you don’t care for babies as you’re holding one that is suckling off your breast. But I find it funny that moms are often first in line to talk about how much they dread the teenage years or the terrible twos. Yes, babies are cute (most are) and it seems a little evil to say, “I don’t like babies” but I’m into honesty. Babies are not my thing.

NOW, this being said, don’t take this to mean that I didn’t like MY baby! I totally dug her in a motherly kind of way, but doing the baby day to day was nothing short of mind numbing to me and if I didn’t have full-time help, I’m pretty sure I would have checked into the looney bin at least a year and a half ago.

Every time I heard, “Enjoy them while they’re babies. It goes fast,” I thought to my self, “Not fast enough.” Does this sound harsh? Am I going to Mommy Hell? Quite possibly, but even though I didn’t love the baby days, my daughter seems to be turning into a lovely little person.

Now that I have a toddler, I’m finding that people LOVE to warn you about the “terrible twos” and how the threes and fours are even worse. While the tantrum thing is a reality in my household now, I find it so much easier to deal with than a 10 pound person who only knows one word for everything (“WAHHH!”) and can’t even hold up her own head. That was far more frustrating and exhausting than laying my fit-throwing toddler in the middle of the living room floor and walking away from her and going about my business until she’s ready to behave like a big girl. I guess the big difference is that I know exactly why my two year old is crying and with an infant, it was a lot of guessing and failing.  And a lot more crying around the clock.

But now that I have my big girl, who eats real people food, can talk in full sentences, walk and run and all the cool stuff that two year olds do, now is when I would like to freeze her in time and keep her little and adorable. Snuggly and silly. Constantly learning and exploring. She is so beautiful and fun and I know the day will come when I’m just not cool anymore. When she’ll look at me and roll her eyes. When she asks me to drop her off a block away so no one sees her with her lame-o mother. When she will just want me to leave her alone.  So for now, I am enjoying my toddler while she is still my baby girl. I love having a “kid” and I know it will go fast.