I really enjoy baking. I wouldn’t say it’s a passion, but it is a lot of fun and it’s something I do well. Every year I take on the challenge of making a birthday cake for Aubrey. It’s my gift to her and I’ll do it for as long as she enjoys it. I know someday she’ll want me to just drop her off at the mall so she can eat a Hot Dog On A Stick for her birthday, so this is something I want to make special for her while it lasts.

Her first birthday was my choice, so I made her a monkey cake: Her second birthday, she chose a Yo Gabba Gabba theme and I think the cake turned out adorable, if I don’t say so myself: 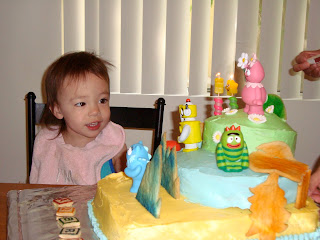 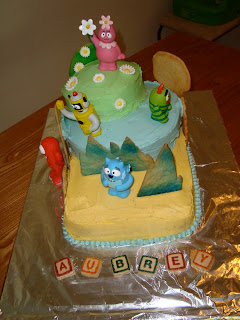 Last year, my mom sent me a Williams-Sonoma donut shaped cake pan as a just-for-fun gift and as soon as Aubrey say it, she wanted me to make it so we had a giant donut cake for her third birthday and made it a baker’s theme. She got her own baker’s hat and apron with her name on it too: 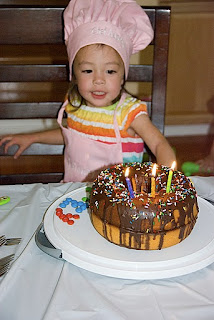 This year, a reptile guy came to Aubrey’s preschool and the kids got to touch snakes, lizards, toads and more. Aubrey was taught to be afraid of snakes by some other parent and nanny in her life (a-hem) and she freaked out a little when it was her turn to touch the snakes, even though I was the parent volunteer holding the snakes. 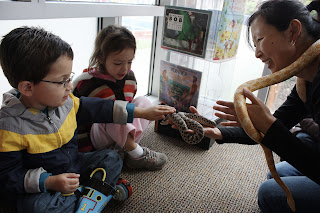 Needless to say, I was a little shocked when she told me she wanted a SNAKE CAKE for her birthday this year! One of the many ways Aubrey amazes me is that she takes on the daunting task of facing her fears head on – all on her own. No one taught this to her, she just does it. She forces herself to confront her fears until she desensitizes herself and even starts to enjoy the thing that scares her. She’s done it with hippos (yes, hippos), pirates and skeletons and now, snakes!

So a snake cake it was and I let her choose the color: “Orange with purple polka dots!”

The clock started ticking and I started planning the cake. I’ve decided to post the instructions and results here because after I finished it, everyone asked me HOW I made it. I admit that I stole the basic construction concept from some ideas I found online, but the rest is original and she was a real hit at Aubrey’s party!

Here’s How I Made Aubrey’s Cute Girl Snake Cake:
It was a 3 day project, a little bit at a time.
BAKING MATERIALS:
– I used one Giant Donut Cake Pan from Williams-Sonoma which is actually two ring pans and then an additional, slightly larger ring pan which I had a fairly hard time finding but finally got at a specialty cake store. I’m sure you can order online if you plan ahead… unlike me.
– I made marshmallow fondant from scratch on day 1. There are many recipes online and very basic to make, easy to store and work with. Just a sticky mess to make, but tastes WAY better than regular/store bought fondant!
And also did some prep work like julienne slicing the licorice for grass and gathering together all of my decorations and tools.
– I made buttercream frosting on day 2 and stored in fridge
For the design: I cut the larger ring lengthwise, in half to form 2 rings. These formed the bottom coil and the middle coil. Then one of the smaller rings formed the top coil and the last smaller ring was sectioned in two to make the tail and the head/neck.
For the coils: I rounded off any sharp edges with a sharp serrated knife and ate the shavings because I was starving. Yum. I also trimmed out some of the center hole of the top coil so it was large enough to stick the neck through later. I also use a little of that piece that I trimmed to help form the head in the following steps.
For the tail: I shaped about a 1/3 of the one smaller ring like, well, the tail you see here and make sure it matches the height of the lowest ring so it looks “realistic” (all using a sharp serrated knife).
The head: This was definitely the HARDEST part for me as the piece of cake you have left (2/3 of a smaller ring you just shared w the tail piece) doesn’t look anything like a snake head. I had to use smaller scrap cake pieces to piece together a roundish head, then sort of hold them together and try to frost it all. An assistant (like my very nice boyfriend) is helpful at this point.
After cakes were cooled and cut and frosted in a “crumb coating” – I stuck in fridge as I went – it’s a very easy cake to work a piece at a time.
Obviously, start with the bottom coil and work up. Roll out your fondant and apply. I used long strips and because I’m not very skilled with fondant yet (this was my 1st fondant cake) I had to use 2 strips on each coil. I couldn’t figure out how to apply it all in one piece without it getting to bunched up in the center, so I did it in 2 pieces each coil and you can see the seams – not the end of the world.
Then the fun, creative part… DECORATE!
I used:
Eyes: Mrs Potato Head’s eyes!! Perfect for poking right into the cake!
Polka Dots: Wilton Sugar Sheets (pain in the ARSE without their expensive cutting machine. I thought metal cookie cutters would work, but they don’t. I had to have my boyfriend pound out each polka dot with the cookie cutters and a heavy duty rubber mallet! You might explore other options, although I think they look great. Apply with a light amount of water on a small paint brush. 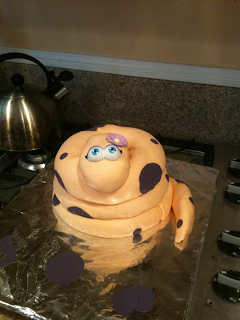 Flower: store bought sugar cake decoration
Grass: Green apple licorice that I julienned – bought at bulk candy store
Rocks: Chocolate candy rocks – bought at bulk candy store
Cookie Lettering: Trader Joe’s Cinnamon Schoolhouse Cookies – painted them orange with aerosol spray food coloring (bought at Michael’s). Stuck them to the foil covered cutting board with dots of icing.
Nostrils: I had some Halloween colored cookie sprinkles and used 2 black dots from there – applied with a dot of icing
Tongue: cut out of a berry fruit strip (fruit roll ups work too). Tip – draw and cut out a guide on a piece of card stock first and then lay it on the fruit strip. Trace with a very sharp knife. (i.e. don’t screw it up if you only have one fruit strip)
Used some of the chocolate cake batter to make one cupcake for the candle holder since I didn’t want to put them in the snake, and my daughter really wanted the other little candles, so I made a little fondant candle holder for them.
I had a blast making this cake, but it was a lot of work. The beauty of the decorating I used was that I could cover the seams and any imperfections with polka dots 🙂

And that’s my Cute Girl Snake Cake! I hope she inspires you and good luck if you try it.