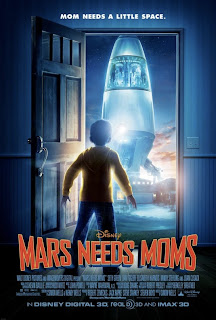 I’m sure you’ve seen the trailers and ads by now, but the new Disney movie, Mars Needs Moms, opens today and Aubrey and I were included in a lucky group of families who got to pre-screen it earlier this week.

The movie is based on the children’s book of the same name, by Berkeley Breathed and it is the story of a young boy, named Milo (played by Seth Green). Milo’s wonderful mom is swept up by Martians who need moms who know how to make their children behave. Mars has been ruled by a crabby old lady Martian for generations (played brilliantly by the ever hilarious Mindy Sterling) who has orchestrated an army of “nannybots” to raise the baby Martian hatchlings. In order to program the nannybots, they need real moms – thus the abduction. Milo ends up on an intense, but entertaining quest to rescue his mom from Mars with displaced Earthling “Gribble” (played by Dan Fogler) and a rebellious Martian girl, “Ki” (played by Elisabeth Harnois).

Here’s a quick, helpful MOM review in-case you were wondering whether or not to bring your kiddo.

1) We really liked it! Dare I say, better than Toy Story 3? Yes. I liked it, believe it or not, a lot more. The storyline was great, the animation was cool and the acting was impressive. The film’s animation is getting a little bit of a thrashing in other reviews I’ve read and while I’m not animation expert, I’ll let you know it’s that computer generated motion-capture style – the same technology they used in Polar Express. I guess this creeps some people out, but I kind of like it.

2) The movie is rated PG, so it may be a bit too intense for younger ones. My daughter is 3-1/2 and wasn’t scared at all, but she was scared during Toy Story 3 several months ago. Go figure. Most of the scenes in the movie are dark and there is a lot of intense action, including falling, laser gun shooting, chasing, etc. You will have to judge if your kids are good at handling intense action, even though it is a kid/family movie.

3) Stay and watch the credits if you can, as they show clips of how the motion-capture style animation is shot with the live actors. I think this was actually my favorite part! So fascinating and cool to see!

4) Wah-Alert: Lots of moms told me they wah-wah cried during Toy Story 3. Well, watch out then. There are a couple mom-centric scenes in this one that will get you!

5) The main thing that I found to be a little disappointing about this film – and this is mainly from an actor’s perspective – is why Seth Green to play a little boy? They manipulated his voice to make him sound age appropriate and I admit, he did a really nice job with the part, but why? Aren’t there a zillion boy actors out there who would have done a great job? Whatev.

This wasn’t the perfect kid/family movie, but it was a really good one and we are glad we saw it. Aubrey loved the girl Martian character, “Ki” so much, she has a temporary tattoo of her on her forearm now. I don’t think it’s going to be a giant Disney classic, but the entertainment value was there and I’d totally recommend it. Just remember, it is PG. The little ones might think it’s a little s-c-a-r-y.

Minnie's Masquerade And The Mickey Mote! 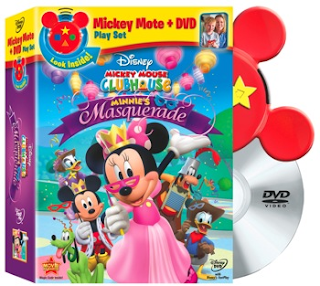 About three months ago, I wrote a review of the new Disney Mickey Mote, interactive kid’s remote for use with special Disney DVDs. While we weren’t thrilled with the Mickey Mote at that time, I knew it was just a little too soon for Aubrey to grasp the concept and have the patience to listen to the video’s instructions before pushing the buttons. My prediction was that in a few months, she would get the hang of it and love it… and I was RIGHT! She LOVES the Mickey Mote now and just in time for a new interactive DVD. Am I clairvoyant or what?

Lucky for us, we got to preview the new Mickey Mouse Clubhouse : Minnie’s Masquerade DVD with the Mickey Mote and she is hooked. She loves anything Disney, of course, but especially Mickey, Minnie and Pluto. They are her current faves.

In Minnie’s Masquerade – Minnie, Mickey, Donald, Goofy and Daisy – take families on a new adventure as they dress up in costumes for Minnie’s Masquerade Ball. This DVD features four episodes previously seen on the Mickey Mouse Clubhouse TV show, a never before seen episode and a fun masquerade paper mask that kids can personalize.

Aubrey is having a great time with this new Minnie DVD and she even insisted in teaching her 64 year old nanny how to use the Mickey Mote with it!

The DVD can be watched just like a regular DVD or used with the interactive Mickey Mote. I love the Mickey Mote feature too because Aubrey is actually engaged and thinking while watching rather than sitting like a couch potato (the way I like to watch tv – shhh) and it even works with our 3 year old, $39, total piece of crap DVD player. (Yes, I’m that cheap. Or broke. Or both.)

Not Smurfs - Disney. On Ice.

Hi Everyone! I hope you’re all recovered from the first round of holiday gorging. I just got back from a quick run and making some fitness goals for myself so I can be ready to eat more for Christmas and New Year’s!
Only two more weeks until my boyfriend, our nanny and my VERY excited 3 yr old daughter go to the new Disney On Ice show, “Let’s Celebrate!” I’m really excited for this show. I like almost any entertainment with the Disney brand, but it also has been about 30 years since I’ve seen any kind of “fillin the blank” on Ice show. In 3rd grade, I saw Smurfs on Ice!! No joke. But I’ve never seen any of the Disney on Ice shows and I know it will be great. I’m always amazed at how those people skate in those giant, bulky costumes. That alone is worth the price of admission.
Anyway, if you live in SoCal, I have a great family deal for you on tickets! Details are at the end of this post. 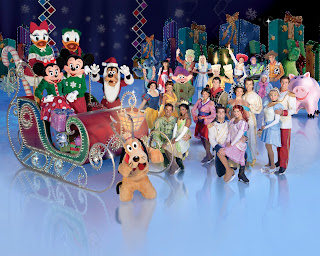 Use the code “MOM” at TicketMaster.com or by phone at 1-800-745-3000, to redeem your savings! Savings to not apply to front row or VIP seats. No double discounts. Service charges and handling fees may apply.

We’ll be at Staples center! Hope you and your little ones can make one of the performances too! Happy holidays!