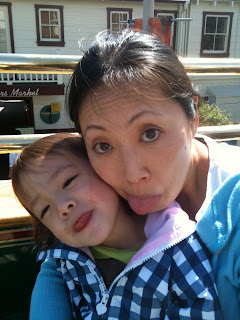 OK, single moms… so we’re probably NOT at the club, but here’s my shout out to you and your total amazingness. Most mommies in the blogosphere are awesome ladies, but we single mamas deserve some extra lovin from time to time. Check out my latest (and probably last) post for LAMomsBlog. Let me know what you think:

Can This Single Mom Ever Be Normal?
Now, I’m off to pick up the little turkey from preschool! It’s gonna be ALL KINDS of crazy in my house for the next hour. She’s always insane after school. Overly tired and stimulation overload. Ahhhh… good times. Today, one of her teachers told me that they thought they should get a clipboard just for Aubrey so they could write down all the funny things she says every day. She said there were so many things, that they knew they would forget them. Apple doesn’t fall far people. I think I have a class clown on my hands! I’ll write more about this later.
Have a great afternoon!

No Christmas For The Weary 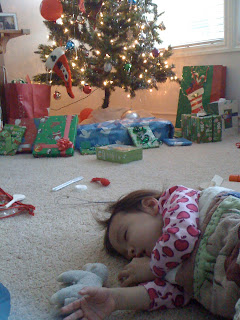 Many of my friends and family have been following my crappy Christmas saga via my Facebook updates. This truly was a rotten Christmas for Aubrey and me, but it’s never to late to celebrate…

Christmas 2009 officially goes down in the books as the WORST Christmas ever. In fact, as far as I’m concerned, Christmas hasn’t even happened yet.

Aubrey’s father, my ex-partner, and I live about 26 miles apart from one another. It was her turn at his house but this year we co-purchased her “big” Christmas gift and both wanted to be with her when she opened it. Our plan was for me to drive to the ex’s house Friday morning and do Christmas morning gifts together. Our nanny is on vacation until Monday, so it would be just the three of us.

Well, Thursday during the night, Aubrey woke up with a fever. By the time I arrived on Christmas morning, she had a high temp, sore throat, cough and was listless. When we decided she needed to see a physician, our pediatrician’s office was just closing shop. It was nice of them to have Christmas morning hours available, but there was no way we were making it from Westlake Village to Santa Monica in fifteen minutes. Stupid far away Ventura County.

So we spent Christmas day in the emergency room doling out a small fortune to be told something along the helpful lines of, “it’s probably viral but could be bacterial”. Thanks Dr. Holmes. The doctor didn’t say a thing about her ears and just that her throat was a little red, but not bad. He wrote a prescription for amoxicillin and never ran a strep test. When you’re in the heat of the moment with your one and only, never been sick like this before, screaming, feverish child, you don’t necessarily think to ask questions, like, “Should we run a strep test?” Or “Are you sure you didn’t see any inflammation in her ears?” Or “Tsk tsk,” the doctor for writing a prescription for an antibiotic when he’s guessing whether or not your child has a viral or bacterial infection. You kind of hope the doctor would think of these things on their own in a professional, doctory way.

The night got progressively worse as Aubrey went into her first ever barf-fest, vomiting five times during the night and her sore throat getting worse. The next morning, Dec 26th, we made the 40 mile trek (Did I mention that I HATE Ventura county?) to our pediatrician’s office and finally discovered that Aubrey had an ear infection. The first one she’s ever had and the first one I’ve experienced as a mom. It’s late afternoon now and she finally ate some chicken broth and water without yerping it all back up and has been napping her little life away. I think the worst is behind us and she’ll start her antibiotics as soon as she wakes up.

So is this piece about the incompetence of some physicians? The heartache and helplessness of seeing your child suffer from illness? Or the TOTAL funky weirdness of having to hang out at your ex’s house all day and spend the night because you live so frickin’ far apart from each other but you want to make sure your child is well taken care of without having to cart her all the way back to your house in Sherman Oaks and risk her barfing all over your leased Honda? No. Well, actually, yes. It’s about the latter, but let me restate that in a kinder, gentler, not completely jaded way…

This piece is about setting differences aside and doing the right thing. I can’t say that my ex and I have had the best of times since our split and even recently had a bit of a flare up over some personal issues. And while we have fairly different parenting styles and immensely different personalities, we do both love our daughter and want the best for her. That is why I am sitting in my ex’s house in Ventura county, co-watching over our sick child. Making sure she doesn’t choke if she vomits in her sleep, helping to keep her hydrated, making Tylenol and Pedialyte runs. We are not best friends and we don’t spend time together in any other way, but tonight I’ll eat leftovers from his fridge and sleep in his guest room in case she has another episode during the night. For now, we are working as a team because our third member needs us. And, as much as I hate to admit it, he and I need each other right now too. It is too much to do alone and as I sit here typing in a dimly lit living room while my baby sleeps on the floor next to the Christmas tree, my heart goes out to every parent out there who has had no choice but to do it alone. You deserve a purple heart.

The saddest part of this entire holiday fiasco is that poor Aubrey has been so sick, she still hasn’t opened her Christmas gifts. We have asked her if she wants to open them several times and the answer is always a feeble little, “no”. It is almost December 27th and maybe tomorrow will be the morning my little one wakes up feeling well enough to smile and dance and sing again. Maybe tomorrow, it will be Christmas.

My Toddler, The Basketcase 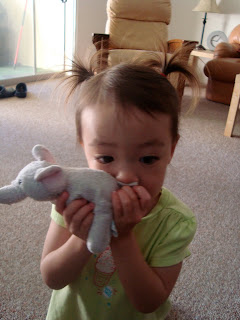 October was a really trying month for my little Aubrey and me but we made it through with a little help from Skype, Nelly the snuggler elephant and cabernet…

I know everyone thinks their kid can do no wrong and for a while, mine was pretty darn close. I’m totally aware that this sounds SO stuck up, but in the great scheme of things, she really was a textbook “good” child. Especially for a two year old. Very few tantrums, likes to share, naps and sleeps well, potty trained like a champ, eats almost anything you put in front of her, never gets sick, plays well alone or with others, intelligent and kind. And beautiful… because she looks like her mother. I was kind of living on toddler easy street until – dum dum dum dum (you’re supposed to sing Beethoven’s 5th there) – my ex, her father, went on a three week business trip out of the country.

Neither of us had ever been away from her that long and I truly underestimated what a traumatic effect it would have on her as she had always been such an easy going child. My ex – let’s make up a name for him so I can stop referring to him as “My Ex”. How about Lex. It rhymes with ex and also reminds me of Lex Luther. Lex and I split when Aubrey was still an infant. We have shared custody and a full time, live-in nanny between our two homes so Aubrey is accustomed to a back and forth lifestyle but she had never gone without seeing one of us for more than a week at a time.