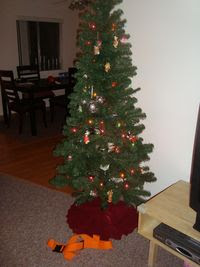 Now that my little girl is two and a half, I’ve had to put some serious thought into whether or not I want to “do” Santa Claus. I think this will be the last year I can get away with not addressing the big Santa question and I’ve made up my mind as to how I’d like to handle it. Now if I can just get my ex to agree with me, we’ll be all peachy and fine…

Decision made. I’m going to leave the mom-guilt on the shelf and make the decision that feels right to me and that is: I am NOT going to teach my kid the Santa Claus myth. This is always a hot parenting debate around this time of the year and I’ve heard every good and bad argument for and against Santa Claus and his whole posse of reindeer, elves and that very supportive wife of his. I’m talking EVERY argument and people are cut throat and passionate about their position on the matter to the point of being absolutely rude. Bottom line, I don’t think the pro-Santa parents need to be so mean to the non-Santa parents and vice versa. Can’t we just agree to disagree?

My daughter just turned two and a half and this is the first Christmas she knows who Santa is. She recognizes his image, but she hasn’t been taught that he flys around the world in a sleigh pulled by magic reindeer to come down the chimney and leave gifts for good boys and girls. At this point, I’m pretty sure she just thinks he’s a pretend character that is a lot of fun. Wacky, huh?

I’m really ok with her knowing the Santa story – in fact we have the Tasha Tudor The Night Before Christmas book at our house and we love to read it together – and even talking to the Santa at the mall. Last week we were lucky to catch him during a slow period and he was kind enough to chat with my daughter for free. I just don’t feel right about teaching her to believe a fake story just to get into the commercialism of the holiday. I’m also not into the “if you’re good you get a present” philosophy of life. Probably explains why I’m not a Christian. No offense, but Santa-anity and Christianity are VERY similar, you must admit. I’m trying to teach my child to be good because that’s the way human beings should be, no matter what. Intrinsic goodness. Kindness. Generosity. Love. Just for the heck of it. What a concept.
I’m not a religious person at all, so it’s not important to me to celebrate the holidays like a maniac, but I’m not above celebrating a special season. I love the music and the lights. The general festivity of it all. I grew up with big, traditional Christmases and I have many fond memories of thinking Santa was coming and then getting crap loads of toys. But no matter how fond those memories are and how grateful I am to my parents for doing so much for my three brothers and me, it’s not quite what I want for my child. I don’t want to foster a love of “things” in my child.
I’d like her to understand the holiday season as time to celebrate togetherness with friends and family, a time to be grateful for what we have and to share with others. We try to act this way all year round actually, but the holiday season can be a special reminder of just how lucky we are.
I’m not a total Scrooge either. I did finally break down and buy a tree this year. A small Wal Mart number. It cost $20, the string of lights was $1.84 and I have a nice box of beautiful ornaments that my mother collected and saved for me over the years. I did my super single-mom duty of lugging the tree home, assembling it, lighting it and getting out the ornaments. My daughter was enthralled for the first three ornaments and then she found an orange luggage strap that just happened to be in the box of ornaments. She got REALLY excited about that, ditching the tree decorating completely. While she pretended the luggage strap was a seat belt, a necklace, a jump rope a back pack and more, I decorated the Wal Mart tree… by myself. And I’m sure I will be un-decorating it and putting it away the same way.
I understand the many reasons some parents “do” Santa Claus with their kids and I’m a-ok with it. To each his own and I will do my best to teach my child to respect other peoples’ traditions and family celebrations and hopefully she won’t spoil the fantasy for her Santa believing peers. I just hope that all those parents pretending to be Santa Claus each year, ask God for forgiveness for lying to their children. Just kidding. Happy Hanukkah everyone!

The Tree is UP! Whoopee! 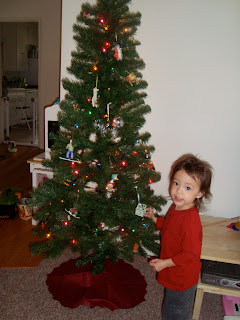 Happy season’s greetings to all! This is the first year I decided to put up a tree and it’s pretty cute. It does cheer the house up. I’d leave it up all year, just for fun, if it wasn’t another thing to dust.

I’m a bit of a scrooge during this time of the year because, well, for many reasons:
1) I’m not religious at all, so Christmas or Hanukkah aren’t super meaningful to me. In fact, since I’m not religious, Christmas and Hanukkah just seem more and more to me about commercialism and the having of STUFF. I don’t like stuff.
2) This is the slowest time of the year for my work which means I’m usually pretty lean in the pockets and frustrated because I’m not working as much as I want to be
3) I am the single mom of a child who spends part of her time at her dad’s. Last year and this year, she is going to her other house for Christmas, which means I will be completely ALONE! (Boyfriend is going out East to visit family and I have opted not to spend $900 on a plane ticket to visit people I’ve never met before)
4) I’m just not a sentimental person. I try sometimes, but it’s not really me.
I do enjoy the spirit of the holidays and the ideas of giving and togetherness, but this year, as last year, I will be going to a bunch of movies with a couple of friends. Aubrey and I will open gifts from grandparents either before she leaves for her dad’s around the 23rd, or after she gets back after Christmas.
I do wonder if my daughter will be bummed out that we don’t have hard core Christmas traditions? I’d rather have other traditions I guess – like something for her birthday.
But back to the tree. I did buy a tree and we have enjoyed having it here. There are a few ornaments in particular, that Aubrey loves to play with and is determined to break. She already broke the oldest one I have and honestly, it was ok with me. It’s just a thing.
On Christmas day, the Wal Mart tree will be sitting in my living room, all by itself, in the dark, with the lights off. Lame, huh? Let me know when January is here!