My Week in Hong Kong

My week in Hong Kong is coming to a close. My friend, Sheri, and I will head out tomorrow night and arrive home in Los Angeles – magically – the same night. I love that time travel thing.

This was my first trip to Hong Kong and I have to say it is quite an amazing city. Crowded and intense, yet efficient and orderly. It’s filthy and clean at the same time. Clean for the number of people squished into one place, at least. Hong Kong is 6x the size of teeny little Washington D.C. but has over 7 million people. That’s a LOT of people. Fortunately, they are mostly small. Hee hee.


But yes, grimy and gritty like a metro area should be and it stinks, just like NYC but unlike the Big Apple that I love so dearly, there isn’t trash in the streets, graffiti on the walls or general vandalism. For the most part, people here follow the rules and respect public spaces and property. It is a safe city with an extremely low crime rate. Let’s face it: Asians (not Asian Americans) make good lemmings. It is part of their culture and it is why over 7 million people can live in a small space and not steal stuff from each other


This city is the city that really doesn’t sleep. There’s an amazing night life and party atmosphere any day of the week if you just look in the right place.


The shows I headlined at Jami Gong’s, Take Out Comedy Club, were a ton of fun and I really hope I get to go back again soon. 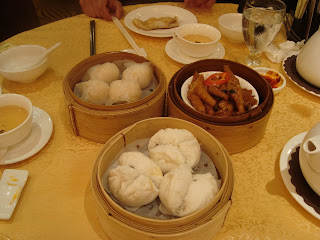 The food, of course, is amazing. I only wish we had had more time to visit some locals-only places, but we did find a couple great ones. We also had dim-sum three times and I loved every bite. Well, OK, I didn’t LOVE the chicken feet, but they weren’t all bad.


…well, I started writing this when I was in Hong Kong and now I’m home in Los Angeles. It has been a week and I’m still not fully recovered! It really was intense. 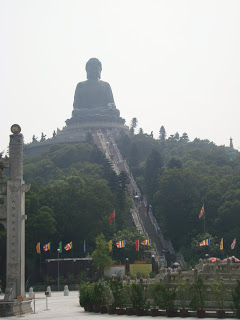 I think my favorite parts of Hong Kong were getting out of the city and going to peaceful Lantau Island where the Big Buddha is. And it really IS big! And actually just walking around and seeing the locals in action and meeting the many ex-pats who populate the landscape. It was an eye-opening experience to see so many caucasian people in the minority.


If you like to travel, Hong Kong should be on your must-see list. It is truly one of the great cities of the world. Sorry to sound like a cheesy travel book, but it really is! I’m totally hooked. Next time I go, however, I hope it’s not during the humid/hot season and I’d like to go over to Macau Island to do the world’s highest bungy jump! WOOHOO!! Here’s to next time!

SICK and SICK of it!

I’ve been procrastinating on getting this blog started, mostly due to a busy work schedule right now. So here I am, writing my first post and it’s about being sick! AHHHH!

I rarely get sick. I’m a super healthy being, I eat fairly well and exercise fairly regularly. I’ve been blessed with a great immune system and I get sick maybe once a year. I got a bad cold on Christmas night and thought I was good for a while. But then… travel happened.
Nothing like sitting in a germy plane and touching lots of college students to give one a terrible sinus infection or something. I perform at a lot of colleges and universities these days and we all know what a breeding ground for illnesses campuses are. I had two shows in New England and came home last night for two quick days with my daughter before heading out for another week. I felt the sick coming on somewhere over the Midwest and ended up with a fever, body aches, the whole deal by bed time.
I’m feeling a lot better now thanks to a restful day of NOT playing with my daughter (the whole reason I came home) but tomorrow night, I have to take a red eye, with a layover, to Maine and then drive a rental car six hours to do a show in Presque Isle. Stupid. Really stupid planning Amy Anderson. Wish me luck. I promise the blogs will be more interesting and entertaining after this!