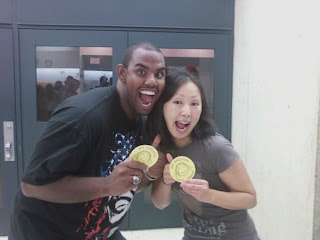 Post Show at U Mass-Amherst!
I took a red eye to Boston and drove to Amherst, MA on Friday night. Had pizza with a Westminster Choir College (my alma mater)alum who is teaching at an interim position there and then did a show. Ate more pizza. Slept 3.5 hours and headed back to the Boston airport.

As for the show, I had the pleasure of performing at U Mass-Amherst and when I got there I met this young guy named Bo Burnham. I forgot that I was sharing the bill with another comic and apparently, it was him. He was introduced to me and I asked if he was a student. “No, he’s the headliner”!! Hahaha! Wow, that made me feel old. Then I was told he just turned 19 and is one of these YouTube phenoms.

I had never heard of him before. He sings silly little songs with titles like “My Whole Family Thinks I’m Gay”. I believe this is his biggest hit. He posted 2 songs on YouTube.com 2 years ago and now he’s filling theaters and clubs with 18-22 year olds all over the country and is the youngest person to be given a Comedy Central Presents special. Wow.
I don’t find him to be particularly funny (I think it’s easier to enjoy his stuff if you’re not an adult) good on him for capitalizing on his viral fame and it’s nice that he has super supportive parents who act as roadies and sell merchandise for him after shows. I met them and they are charming people. We are in a closer age bracket than I am with Bo. They are younger than my boyfriend. Man, life just FLYS by, huh? Anyway, it will be interesting to see what happens to this guy. Will he become the next Chocolate Rain guy? Or will he sustain a career? This is a nutty business and I wish him all the best. He has 20 months of experience and I have 12 years. Seriously, all of those approximately 1600 college kids didn’t turn out to see me. They came to see Bo and it was a humbling experience.
Anyway, why did I even mention all of this… just random thoughts as I kill time in Logan International Airport, waiting for a flight to Vegas.
I’m at the Pearl Theater in The Palms Hotel and Casino TONIGHT, performing with the Hot Tamales Live show. I hope to see you there! Better pack up the Macbook and get ready to board.