MomsLA Post: My Sweet Little Nelly (And I'm Not Talking About The Rapper)

I have a new post up at MomsLA and it’s about something in this photo. And it’s not my kid…well not totally. Click to read:


Sorry I’ve been blog remiss, but the holidays really did get the best of me in the most wonderful kind of way. Now we are in FULL swing back to work and it’s awards season, to boot. Modern Family has been nominated as Best Ensemble Cast for a SAG Award and Golden Globe. Crazy. Awesome. Exciting. Surreal.


In a moment of normalcy around the house tonight, Aubrey started telling me about the haunted house at Universal Studios. Her dad takes her there a lot because they got season passes and apparently there is a Frankenstein character who walks around the park and goofs around with people waiting in ride lines. Aubrey has been led to believe, or more likely has made up in her 4yr old mind, that Frankenstein is in the haunted house.


Initially, she was TERRIFIED of old Frank. Screaming and crying every time she saw him, but my little turkey has a long history (well, ok about 3 years) of facing her fears head on. She does this on her own and we didn’t teach her to do this. It’s in her nature. When she’s afraid of something, she obsesses over it until she desensitizes herself and eventually, grows to love the former fear. Essentially, she’s her own psychotherapist which, in the long run, should save me a fortune.

Last year it was snakes after a reptile guy came to her preschool. She obsessed over snakes so much she decided to have a snake themed birthday party and now, the fear is old news.


Tonight, she started rambling on and on and on about Frankenstein, which is nothing unusual these days. The desensitization process involves talking endlessly about the subject. But I heard her say something that was too good not to capture on video – for future bribery and humiliation. Maybe at her graduation party or wedding reception. I bet her prom date will like this too. God being a parent in the digital age is great:

So Proud To Be A Modern Family!!


1) Modern Family swept the Emmys on Sunday night. Like rolled it with a Hoover and then dust bustered the crumbs people. Amazing.
2) My super awesome and snuggly Aubrey is the new “Lily” on said hit show:

Most moms/parents would be proud of their kid scoring the sweetest job for a 4-yr old in prime time television and I’m no different. I’m so proud that I can hardly contain myself from telling complete strangers at the gas station, the grocery store, public restrooms… but I’m also aware that there is a stereotype of the Hollywood-Showbiz mom and it’s not a pretty one so I wanted to take a few minutes to tell you my feelings about this recent life changer and dispel any celebrity gossip. HA!


I have been in this business for over 14 years as a stand up and improv comedian, an actress and writer (…and waitress, dog walker, temp worker…) and I know the ups and downs of this business, the pitfalls and the pleasures. Show business is not for the faint of heart and it is not for most, but there is a special breed of freak who just can’t resist the spotlight. I truly believe you are born with this freak gene and my kid seems to have inherited it from me.


Am I proud? Yes. Am I excited? Yes. Am I a little scared? Of course. But I feel equipped to guide and coach her in her career and be a real mom to her as well.


So before the rumor mill begins swirling after this initial night of worldwide exposure, here are some tidbits that I have already been asked about a lot already:


1) Aubrey wanted to try out for the show and she was NOT a child actress before this. This was her first time memorizing lines and acting. I had no desire to get her into this business, mainly because I’m pretty busy driving myself to auditions and feeding myself snacks in the car.


2) We are not rich now. As soon as I posted the news that Aubrey had booked the role back in July (?) FB “friends” started making comments about us going on vacations and buying expensive rides, etc. We are still living in our rented town home, driving a 10 yr old mid-sized luxury sedan with lots of scrapes on the bumper (previous owner, thank you very much), clipping coupons and accepting clothing hand-me-downs. Aubrey is making decent money for a four year old, but Ed O’Neill’s salary it is not. We are VERY fortunate to be able to plan for her future and right now we are focusing on her well-being, happiness and education. She does attend regular pre-school on days she’s not on set.


3) Aubrey’s dad and I are not together. We were a couple for several years, but never married and split when she was an infant. We are both involved in her daily life and share responsibility of raising her. We are both very happy about her success but mostly both love being her parents. She’s an amazing girl.


4) I am a Korean born adoptee which means Aubrey is half Korean and half caucasian. The Hiller twins (they played Lily seasons 1 & 2) are Filipino and caucasian. So, no one is actually Vietnamese… get over it and there are tons of Asian adoptees who are mixed race. So get over that too.  🙂


5) Most importantly, Aubrey loves her work with Modern Family. She truly enjoys the time she spends with the cast and crew and even begs to go see her “tv friends” on days she’s not scheduled to work. We have hit the jack pot, not just in the monetary sense (see #2) but with this show. My boyfriend, Lee, and I were devoted fans long before Aubrey booked this role. The show is brilliantly funny with the best writers and I can honestly say that every person we have worked with on the show – cast, crew, admin, execs – kind and wonderful people with good hearts. I think it shows in the product they put out each week, does it not?


We are thrilled to be a part of this amazing show. BEYOND THRILLED and I am so touched by our friends and family who have gotten excited for us, telling everyone they know to tune in! Tonight is the night and life will never be the same for us. I’m not sure that we are ready, but we are grateful. Thanks for coming along on the ride! 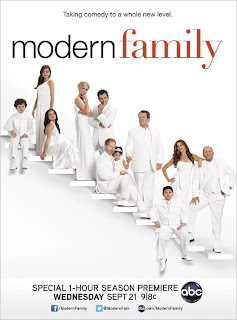